Do you know the location of the first barn to have a silo on Big Pine? This unique barn is located at the end of Big Pine where South and North Fork Roads split off. It is really two barns in one. On the lower level, not at all visible from the front since the addition of the shed-like structures, is an octagonal barn that accommodated the dairy cows. The superstructure is large and has been used to store hay and for air curing tobacco. A silo– the first silo on Big Pine– some 40 feet high, was added for silage.
According to the Wild Family chronicler, Helen Marie Wild Faulkner (she published The Wild(e) Family History in 1998), Jacob Robert Wild bought 180 acres on Big Pine from A.M. Gudger in 1884. Two Wild brothers, Felix and Hans Jacob, had emigrated from Switzerland in 1793 as the Revolutionary War was winding down. They landed in New York, traveled to Philadelphia, then to Burke, Catawba, and Lincoln Counties by the 1790s. Some of Hans Jacob’s children ended up in the Flat Creek area of Buncombe County by the late 1840s.
Jacob Robert Wild was one of the original settlers on Big Pine. George Washington Wild, his son with his second wife, Mary Tillery, was born on December 22, 1861. Ms. Faulkner recounts a family story that Union soldiers arrived in 1861 to hang Jacob. He escaped into the cane fields that Jacob grew while Mrs. Wild held George in her arms.
G.W. Wild built the family home on the South Fork property in 1891. No one is able to say when the barn was built, but it probably dates from the 1890s. George was known as a formidable logger and saw mill operator. There was a vegetable garden and the barn for the milk cow and other cattle. G. W. had a grist mill that operated on steam power produced by wood-fired boiler. He also built a country store and post office.
At various times, the Wild land was host to sheep, dairy cows, feeder calves, and pigs. The family also grew corn, hay, and tobacco. The dairy cows produced milk that was collected in large metal canisters that were picked up by the milk producers in Tennessee. The dairy operation lasted at least until the late 1960s or early 1970s. The milking stall still stands in the front part of the lower barn, although the instructions for operating the milking machine that hang from the wall are barely legible at this point.
G. W. Wild was “a visionary with many talents and fantastic ideas of future things,” according to Helen Marie Wild Faulkner. He had learned of electricity and brought electric power to his home by charging batteries with a kerosene engine and generator. Later he generated the electricity by building an overshot water wheel. This in turn was replaced by a turbine in a concrete reservoir. The family home had electricity long before the R.E.A. brought electricity to the area from Barnard in 1947. He owned the first touring car on Big Pine. He served as a representative to the NC General Assembly for the 1919-1920 session. His life in Raleigh introduced him to indoor plumbing which he installed upon returning home from Raleigh.
George’s son Claude helped with the work on the farm. He continued working there until he bought land on Brush Creek in 1938. Claude had acquired a tractor that was used with a threshing machine. He threshed neighbor’s fields for a portion of the yield. Often the machine would have to be hauled up the steep slopes using the mules and horses of the farmers.
Claude’s son Don, who had married Geraldine Cleo Marie Baker in 1937, bought the farm from his father when Claude and his wife moved to Brush Creek in 1938. When G.W. died in 1944, Don bought the family place. He and Geraldine continued to operate the country store for a while, but the demands of the farm became too great and the store was torn down. Don continued the dairy operation, but also had feeder calves that he raised. He built a new brick home in 1953 that was much warmer. The barn continued to serve the milk cows, stored hay, and served to air cure the tobacco.
By 1988, Don and Geraldine were no longer able to keep up with the work on the farm and sold the land, moving to Weaverville. The barn is now home to 2 mules and 1 donkey. It is a cherished landmark in the Big Pine valley.
To learn more about the organization working to document the barns of the county, go to www.appalachianbarns.org
[Thanks to Carol Buckner, Sharon Baker, Cindy and Jeffrey Moore, Dr. William Weber and his wife, and to Helen Marie Wild Faulkner whose wonderful history of the Wild family is a delightful read for their help in preparing this article. D. Van Helden] 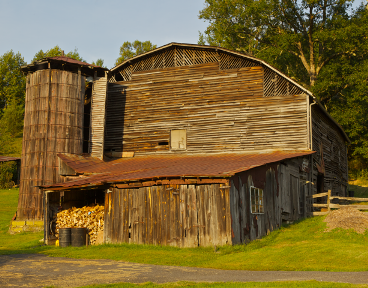