The flue-cured tobacco barns of Madison County  by Taylor Barnhill
Appeared in the News Record Sentinel on April 11, 2012

James and Geneva Roberts live on a classic mountain farm that has been in the Roberts family for many generations. It is located on Bend of Ivy Road between Marshall and Mars Hill on a small creek that meanders through the main valley of the farmstead. This farm represents good examples of many of the out-buildings and barns that were integral to successful farming in Madison County until the early part of this century.

Most of the barns and outbuildings were built in the late 19th and early 20th century, with various additions in the form of shed roof additions for extra work areas, animal stalls, storage, and the processing of seasonal crops. The exact dates of construction are generally unknown, but Mr. Roberts recalls working on additions as a young boy and hearing his parents’ stories about building projects. The most recent farm building is an exemplary wood-framed and pine-board-sided “broiler house” built in 1954 for raising broiler chickens. The chicken industry did not last long in Madison County due to a shift in feed distribution and corporate consolidation. Many of the long and low “chicken houses” of that era can still be found scattered around the county, most of them built of concrete block.

Mr. Roberts never heard when the big main barn was built but knows that it’s very old, and that the end addition was built around 1924 by his grandfather.

Older barns are recognizable by their steep roof line necessary to quickly shed rain water from the split oak shingles that were used exclusively before metal roofing was available. There are very few barns in Madison County that still have remnants of split oak shingle roofing.

The most notable older barn types on the Roberts farm are the two surviving flue-cured tobacco barns. Mr. Robert recalls hearing that his father was working to grow flue-cured tobacco as a teenager in the 1920’s. Unlike air-cured burley tobacco which was grown in the mountain region from the 1920’s until today, flue-cured tobacco was the bright leaf hybrid grown in this area from approximately 1870 until the 1920’s, primarily for the chewing tobacco market. The USDA production records show it ending in 1910, yet some local farmers recall it being raised as late as 1924.

Air-cured burley tobacco soon replaced bright leaf tobacco as the primary cash crop in Madison County, later to become subsidized through a federal price support system that ended in 2004. Today there are few tobacco farmers and the total county production is small in comparison to historical amounts, yet the acreage that these individuals grow is much larger than the average acreage in the past.  At one time the average Madison County farm produced about 2 acres of burley tobacco, while farmers still in the business today are growing an average closer to 18 acres.

Most of Madison County’s native residents are familiar with burley tobacco farming, but may not be aware of the earlier flue-cured process for the bright leaf tobacco. The leaves of the bright leaf tobacco were more compact and succulent and the plants did relatively well on the depleted soil in the mountains of the late 1800’s. Individual leaves were pulled or “primed” from the stalks, unlike with burley harvesting where the entire stalk is cut, wilted in the field, then hung in the barn to air cure. The pulled bright leaf tobacco leaves were laid in a mule or horse-drawn sled pulled down the rows until it was full, then taken directly to a open-sided shed to be tied to sticks approximately four feet long. Several workers would work together, picking through the pile of leaves to gather bunches of three or four leaves and hand them to a person standing at a tying horse. This device was a wooden frame with two vertical boards at each end about 42 inches apart, with v-grooves in the tops into which was placed the four-foot long hanging stick. The person tying the leaves onto the stick would take the “hand” of leaves from the hander and wrap cotton string around the stems in a special knot, tight against the stick, that allowed them to continue down the stick without stopping. A person who was good at tying the hands was highly valued and appeared to have magician-like hand movements that the eye could hardly follow, with the handers barely able to keep up. After about sixteen hands were tied, the stick of leaves would be taken off and placed in a rack to wait until the curing barn was ready, where they would be hung.  A great deal of care was taken to avoid snagging and tearing the leaves on rough boards or nails.

When the barn was ready, the sticks of leaves would be taken off the shed racks and passed from person to person on up into the top of the barn to the person straddling the highest tier poles at 20 to 25 feet high. He would carefully lay the sticks of leaves across the poles at just the right spacing to allow good circulation of the heated air, and thus allow them to cure slowly to get the correct texture and sugar content. The tier poles were about 42 inches apart on the horizontal and 24-25 inches apart vertically. In air-cured burley tobacco, the tier poles are the same distance apart but 42 inches apart vertically because the entire tobacco stem with leaves still on was hanging to air dry.

Most young boys looked forward to the day when they would be asked to be the top man in the barn, signifying that they were strong, not afraid of falling, and able to handle the 100 degree-plus heat under the barn roof. The top man also had the benefit of not having the irritating tobacco dust, sticky sap gum, and dirt and debris falling on them as the sticks were passed up to the inside top of the barn. After the hanging was finished, there was no better feeling than climbing down from the top of the barn into the relatively cool air at ground level, which might be a refreshing 85 degrees.

The flue-cured tobacco barns were built to contain heated air over a period of many days, and their construction was unique. In the mountain region, they were typically built of logs, often of chestnut, and the most common barns used a V-notch to lock the logs together at the corners, as in the Roberts’ barns. The barns were relatively small, square and tall, with dimensions typically twenty feet square and about twenty-eight feet tall at the roof ridge. A few of the chestnut logs still have some of their mature bark, which is the only place to see what mature chestnut bark looks like these days since the death of all the chestnut trees from the blight in the 1900’s. The space between the logs was filled or chinked with clay mud, often with rocks stuck throughout to save mud. The location of the barn was ideally at a site that had good clay and a water source for making mud. The chinking was often covered over with scrap boards to protect the clay from rain.

The foundation was built of field stone gathered from around the site, dry-laid without mortar but probably with some mud mortar to seal any openings. The roof was covered in hand-split oak shingles, likely of the preferred white oak variety, that were 24-25 inches long and of varying widths. The Roberts barn has a stockpile of saved oak shingles that were split by Mr. Roberts’ father in the first half of the 1900’s.

The flue-curing was a process of burning wood or in some areas, charcoal, in a stone furnace or flue that was built on the floor of the barn with the opening on the outside.  The fire was fed by a fire tender, who was often one of the family children, and the tenders had to take turns throughout the day and night.  Maintaining the fire and heat at the right temperature was critical for the proper curing of the delicate and valuable leaves, and a child who was honored with the responsibility might look forward to this serious rite of passage.

Although others may exist, only one partially surviving flue-cured furnace structure was found in Madison County by this writer in the 1980’s, as shown and described by an older farmer on Big Pine Creek. The rocks were stacked into a rectangle about 3 feet wide and 6 feet long, the top stones forming a slightly vaulted arch, with one end going through the foundation under the first log to the outside. The type of chimney configuration is not known at this time, but was likely made of mud mortared stone.

Once the tobacco is taken from the curing barn, the process is very similar to that of the later air-cured burley tobacco. After the right amount of time, and many checks of the leaves for moisture content and quality, the sticks of leaves would be carefully removed from the barn and taken to a case house to be removed from the sticks and tied into hands of soft, pliable leaves, the tying being done with another leaf. The timing of this step needed to coincide with a time of day or night and weather that was damp, and was often a rainy day activity. The case house was typically an enclosed building that was cool and moist so as to keep the leaves in case, or soft and pliable so they would not become brittle and fall apart. The leaves needed to have the pliability and feel of thin suede leather to have the highest value. The hands were placed onto a square tobacco basket and proudly arranged in a spiral around the basket and in neat layers. It was then stored to await the best timing for market price and proximity when they would carry it to a regional tobacco warehouse market in Greeneville Tennessee or Asheville.

There remain very few of this rare and important example of century-old southern Appalachian farm building. From the time of Civil War reconstruction mountain culture survived largely due to the farming of both flue-cured and burley tobacco. 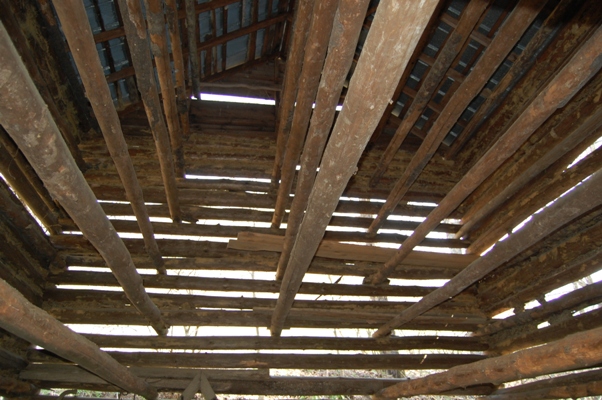 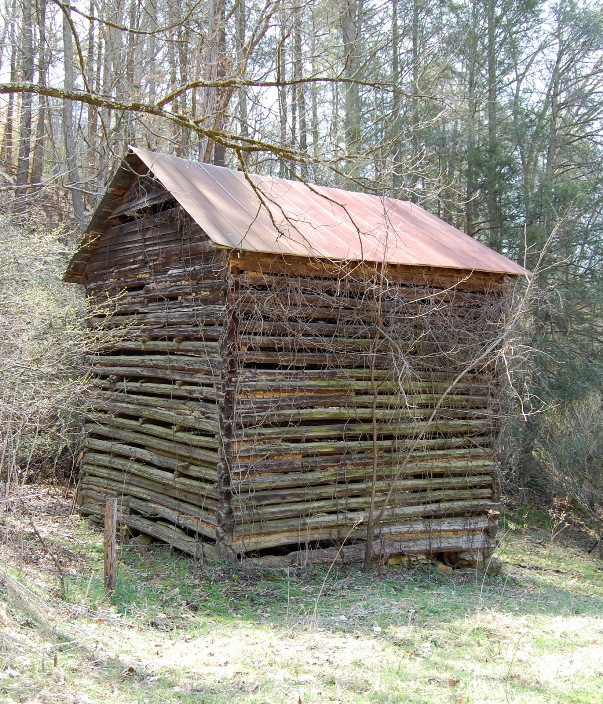 Anyone who owns a flue-cured tobacco barn is encouraged to contact Ross Young (County Extension Director) by email (ross_young@ncsu.edu) or mail to Madison County Extension Center, 258 Carolina Lane, Marshall, NC 28753, to consider your barn to be photographed and measured. 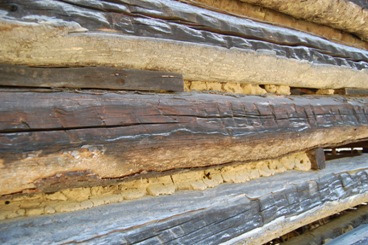 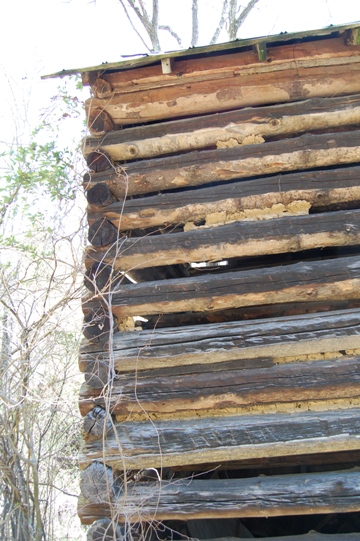