Barns at the JB Anders farm
(Second in The Historic Barns of Madison County Series)
Written by Nancy E. Anders
Appeared in The News Record & Sentinel May 30, 2012

Hanging from my arms on tier poles and “skinning the cat”, tunneling under towers of hay bales, searching for well-hidden chicken nests, finding sleepy kittens freshly washed by their mom and snuggling them to my nose to inhale that one-of-a-kind smell of newly washed kitten and dry orchard grass, those are the memories which come to mind when I think of our old barn.

The old barn is still standing, but has certainly changed from the original log structure. My daddy (JB Anders) always said the barn was built by my great-great grandfather, James Ray, better known as Red (for his hair color) or Reb (for fighting in the Civil War) Jim Ray. Daddy just called him Reb Jim.

Daddy bought our farm in the 1950s, not long after he and momma (Mildred England Anders) were married. He purchased it from his uncles on the Ray side of the family. They had no use for the farm and had allowed many of the buildings Reb Jim built to rot away.

Daddy said the barn was originally built for horses and you could tell this by the big logs which made the high entries to the stalls. He was proven right every time we tried to get mommas favorite milk cow, Yellowbud, to go into the stalls. She was not happy to drag her udder over those logs!

Over the years, the barn changed to reflect the economic and agricultural changes of my ancestors and of the lives of my immediate family. It started as a log structure with a small loft for hay and three stalls below the loft. It was probably built to house horses or mules which were used to clear the land. A trap door was built in the floor of the loft above each stall which allowed hay to be dropped into a feed rack located on the wall of each stall.

The barn remained in full use until just a few years ago when Daddy got sick and no longer farmed. Gradually, the family began using the loft of the barn for storage. After daddy died, momma and I ripped off the wall of one of the sheds, replaced the supports and turned the shed into storage for wood for her basement heater.

I think Reb Jim would be pleased that a barn he built so long ago is still so much a vital part of his familiesâ€™ lives. I love that old barn for the help it has been to my family, but mostly I love it for the memory of freshly washed kittens and orchard grass. Now if we could just bottle THAT scent, we would be rich! 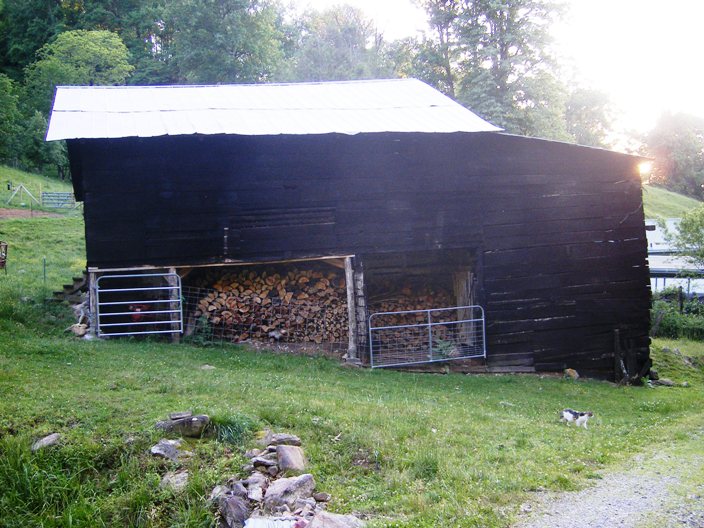 If you have a story to tell about your historic barn, please contact Ross Young at the Extension office (649-2411).