by Randy Bailey
Appeared in The News Record & Sentinel September 5, 2012 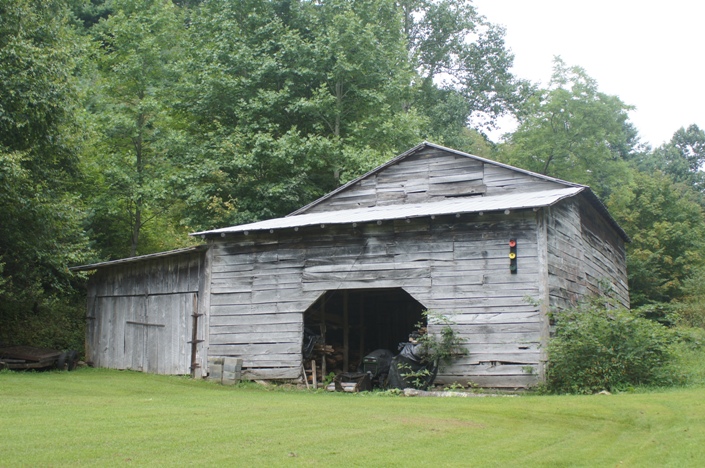 Tucked away in a cove on Smith Creek Road in Upper Laurel is a barn built in the late 1940s on the Carter and Annis Metcalf homeplace. The barn is mostly used for storage now but in its seventy years, it has been put to good use by the Metcalfs and their children and now grandchild — Randy Bailey. Randy’s great-grandfather and great- grandmother Arcemus and Zone Metcalf owned the property in the cove which has eventually been split up and passed on to the children and grandchildren. One of the children was Carter Metcalf who was the one who built the barn. His daughter Martha Metcalf Bailey (Randy’s mother) was just a young girl when her father cut trees from the property owned by his father to build the barn. The logs around the foundation are locust and the lumber is oak. Martha remembers that the trees were taken to the local sawmill to be cut for use. Whole logs were used on the bottom to make rooms for the animals. Other types of trees were also cut in a way to make the most efficient and inexpensive use of what the family had. The boxing is wormy chestnut and the tier poles are locust and poplar. The original metal roof has lasted with only minor repairs.

Because the barn was such an important part of their livelihood, Carter and Annis Metcalf finished it before they finished the house that they would live in. As was common then, they lived in another house on the property while the construction was happening. The barn had several uses–one was for curing tobacco, the main cash crop. The Metcalf grew tobacco until the late 1980s. They also raised beef cattle to sell. Martha remembers the chickens on the farm and how the family sold eggs to the peddler who traveled around the roads of Madison County selling his wares and trading goods.

The barn also has a corn crib and a room for curing meat. The walls of each room are lined with screen to keep out rodents. The family slaughtered a hog each year to feed the family and cured the meat in their barn. Some of the original farm tools are still functional like a corn sheller that is operated with a crank. One of the daily chores might be to stick the ears of corn into the top so that the kernels would come out in the wooden box underneath and the cob would be spit out to be fed to the hogs. Those farming chores Randy performed as a child–for the animals or the tobacco–are now part of his blood just as they were part of the life of his parents, grandparents and great-grandparents before him. Although his sister Ruth has moved away, he still lives on the old homeplace and raises chickens, selling both the chickens and the eggs and raises bees to sell the honey. His father still keeps a vegetable garden for family use. All the family agrees that the hard work involved with farming has brought the family closer together. And, their barn is a wonderful place that reminds them of those memories.